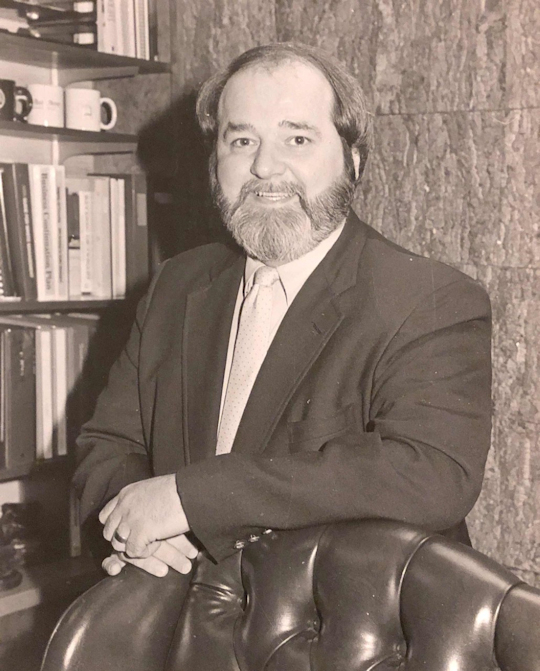 It is with great sadness that we announce the passing of Ewell Herman Balltrip of Somerset, Kentucky. He entered into the Kingdom of Heaven on March 7, 2019, surrounded by his family after a long battle with chronic illness. A native of Harlan, Kentucky, he was born May 27, 1950 and was the only son of Beatrice Meadors Balltrip and Lloyd Balltrip. He was a graduate of Harlan High School and Baylor University.

Balltrip’s career spanned almost 50 years in community journalism, public service, and as the executive of a non-profit organization. As a journalist, he advanced from a summer intern position at his hometown newspaper, The Harlan Daily Enterprise, to become its publisher. From there, he continued to serve as a publisher with the New York Times Company in Middlesboro, KY and Dyersburg, TN. He has received numerous awards for his work in journalism. On March 25th, he will be inducted into the Kentucky Journalism Hall of Fame in Lexington, KY.

In public service, he was on Governor Paul Patton’s staff and headed the Kentucky Appalachian Commission. He was a founding board member and officer of Forward in the Fifth, an education support and promotion group in Kentucky’s Fifth Congressional District. He was also chairman of the Harlan County Community Scholarship Fund (which was organized by The Harlan Daily Enterprise) and served on the board of the Southeast Education Foundation at Southeast Community College. In later years, he served on the University of Kentucky Robinson Scholars selection committee and was a member of the national advisory board of the University of Kentucky College of Communication and Information. He was also an organizer and board member of the Challenger Learning Center in Hazard, Kentucky.

Balltrip contributed to many other activities focused on economic and community development. Balltrip has served as a member of the boards of local Chambers of Commerce, economic development committees,the Mountain Association For Community Economic Development, and Kentucky Highlands Investment Corporation. Another board membership in later years included service with the Tennessee Valley Corridor, a group promoting areas of Kentucky, Tennessee, North Carolina, Alabama and Virginia as one of the premier science and technology regions in the nation. Additionally, Balltrip served on the East Kentucky Leadership Foundation board of directors and assisted with the organization of Leadership East Kentucky (a regional leadership development program modeled after Leadership Kentucky).

At the time of his death, Balltrip was the founding executive and president/CEO of The National Institute For Hometown Security (NIHS), a non-profit organization under contract to the U.S. Department of Homeland Security to research and develop solutions for homeland security issues. He was proud to have built this program from the ground up.

Balltrip was a Godly man, a committed son, and a loving husband and father. He was a member of the Baptist faith and a past deacon of the Harlan Baptist Church. He lived by Philippians: 6-7.

In lieu of flowers, please consider donating to one of the following programs in his memory: Harlan County Community Scholarship Fund, The Rogers Scholars program at the Center for Rural Development, or the Maria Braden Endowed Scholarship at the University of Kentucky School of Journalism and Media. Addresses to these programs may be obtained through the Southern Oaks Funeral Home online obituary.

Southern Oaks Funeral Home is entrusted with the arrangements of Ewell Balltrip.