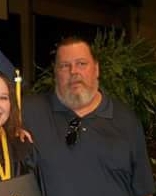 A Celebration of Life will be held at a later date in Virginia.

He was of the Methodist faith and he liked to fish, bowl and work on cars. He loved to watch the Washing Red Skins, play football, watch wrestling and country music.

A Celebration of Life will be held at a later date in Virginia. Southern Oaks Funeral Home is entrusted with the arrangements for Herbert H. Martin Jr.